The reality shows The Bachelor and The Bachelorette give America’s most eligible the opportunity to meet their one true love. Group dates, intimate one-on-ones and final roses are used to weed out contestants until it’s narrowed down to a single special someone. After the finale episode, the champagne wears off and the happy couple returns to their normal life. But, more often than not, reality settles in and the fantasy fades. This matchmaking show seems to have more breakup stories than fairy tale endings. The following are the top 12 quickest Bachelor and Bachelorette breakups.

In her second time around, Emily Maynard starred in season eight of The Bachelorette after her relationship with former bachelor Brad Womack ended. Maynard chose Jef Holm in the season finale, but the relationship only lasted six months. Emily is now married to a man she met in church and they have three children together, as well as Ricki from her relationship with Ricky Hendrick.

Andrew Baldwin proposed to Tessa Horst on season 10 of The Bachelor. Their engagement ended three months after the finale. The couple insisted they were still together until a month later when their relationship ended for good.

In season 11 of The Bachelor, Brad Womack became the first bachelor to reject all of the bachelorettes. In a second attempt to find the love he signed on for season 15 of The Bachelor. This time he managed to take a knee when he proposed to Emily Maynard, but the couple called it quits three months after the finale aired.

Jake Pavelka proposed to the fourteenth season winner of The Bachelor, Vienna Girardi. The relationship took a bad turn three months later when the couple began publicly broadcasting their mutual bitterness for one another.

The Italian-American bachelor Lorenzo Borghese did not propose to Jennifer Wilson at the end of The Bachelor’s ninth season. Instead, the two opted for a relationship that ended two months later.

Chris Soules chose Whitney Bischoff to be his fiancé at the end of season 19. After filming The Bachelor, Soules starred on Dancing with the Stars. Bischoff only spent two months living on the bachelor’s idyllic farm in Iowa before they called it quits in a joint statement.

Matt Grant and Shayne Lamas got engaged at the end of The Bachelor: London Calling. However, the relationship couldn’t survive back on American soil and it ended two months after the finale aired.

In season four of The Bachelor, Bob Guiney offered Estella Gardinier a promise ring in lieu of an engagement ring. But a promise wasn’t enough to ring Estella in. The couple broke up a month after the show aired. Bob has been married and divorced since then, but finally found his one true love when he married Jessica Canyon in 2016.

Former professional football player Jesse Palmer did not propose to Jessica Bowlin in season five of The Bachelor, but the two continued to date after the show aired. The love fizzled fast when the couple broke up a month after the finale. Palmer is now a college football analyst and still unmarried.

Aaron Buerge from season two of The Bachelor proposed to Helene Eksterowicz in 2002. The couple broke up merely five weeks later. He went off to marry a woman from his hometown of Springfield, Missouri and is now the proud father of a little girl.

When Travis Stork chose Sarah Stone in season eight of The Bachelor he didn’t propose, but the couple began a relationship. The romance ended as soon as it started. The two announced their breakup when the season finished taping. Stork managed to keep his name in the spotlight and was a co-host on The Doctors. He finally found love pediatrician Charlotte Brown in 2012, the two divorced in 2015.

The award for quickest breakup in Bachelor history goes to Jason Mesnick and Melissa Rycroft from season 13 of The Bachelor. This couple lasted no longer than a hot minute. Mesnick broke off the engagement on the season’s finale in front of more than 17 million viewers. In a strange twist of events, he then declared his affection for runner-up Molly Malaney. The two are now married and have two children together. 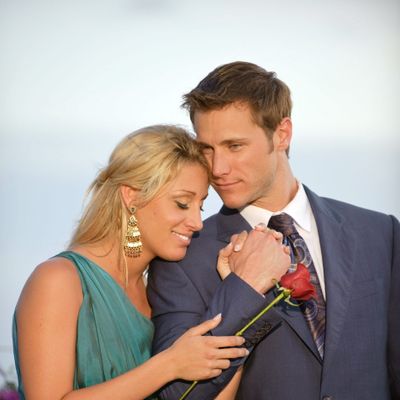