While this year’s 2021 Academy of Country Music Awards may have looked a little different than previous years, that didn’t stop the stars of country music from bringing the glitz and glam. While some stars shined for all the right reasons, others missed the mark. Follow along for our red carpet roundup of this year’s 2021 ACM awards:

Martina McBride looked stunning at the 2021 ACM red carpet where she stepped onto the red carpet wearing this glittering black number. We love the contrasting textures and glitz with this look, which she complemented perfectly with sparkling strappy heels.

We have to admit we didn’t love this bold sequin look worn by Kimberly Schlapman at the 2021 ACM awards. While the dress fit her well, we felt that the pink ruffles around the neckline stood out and didn’t flow with the rest of the ensemble.

Carly Pearce stole the show in this magenta pink one-shoulder number at the 2021 ACM Awards! She styled the look with smooth waves and a bright punch of pink on her lips which really pulled the entire ensemble together perfectly.

We have to admit we weren’t the biggest fans of Ingrid Andress’s look for this year’s 2021 ACM awards. The combination of the sparkly fringe and low-rise pants didn’t seem to properly flow together. We absolutely love her mermaid waves and beachy braids though!

Maren Morris dazzled at the 2021 ACM awards red carpet where she rocked this sleek champagne number. The look flattered her figure flawlessly and the sparkling texture and ruching brought the perfect amount of glamour.

While we love the enthusiasm that Jimmie Allen brought to this year’s ACM awards, we have to admit that his ensemble felt a little over the top! We would have loved to see this eggplant purple shade incorporated in a more subtle way.

Lady A looked amazing this year at the 2021 ACM awards! It’s typically difficult to style a group outfit when it comes to the red carpet, but this country band did so flawlessly by coordinating in various shades of brown and black.

Gabby Barrett is so gorgeous, but we weren’t in love with her red carpet ensemble for the 2021 ACM awards! The flared jeans and sheer blouse combo felt a little too casual in comparison to some of the glitzy gowns that graced the red carpet.

Mickey Guyton had all eyes on her at the 2021 ACM awards this year! We love this pale peach embellished number that she opted for which was the perfect balance of sophistication and glam.

Karen Fairchild, unfortunately, missed the mark this year with her ensemble for the 2021 ACM red carpet! While we love the glitzy texture of this dress, the shape wasn’t the most flattering and the over-the-knee boots felt a little outdated.

As always, Carrie Underwood took our breath away with her look for this year’s ACM Awards! We absolutely love this champagne gold number that she wore during her performance that fit her like a glove and had the perfect amount of soft sparkle to light up the stage.

Miranda Lambert is typically a red carpet all-star when it comes to awards shows, but we admittedly weren’t the biggest fans of her look for the 2021 ACM awards. While we can appreciate a little country flair, this look simply felt mismatched with the varying shades of denim combined with bold turquoise jewelry.

One of our favorite looks of the evening at the 2021 ACM awards was this emerald green look worn by Kelsea Ballerini. The structured strapless neckline and silky texture of the dress really made a statement and looked so gorgeous on her! 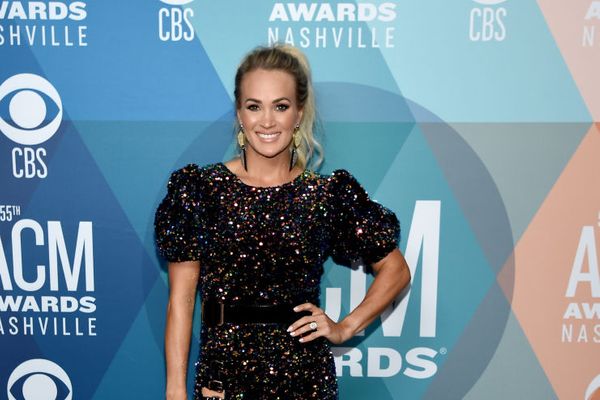