This year’s 2018 American Music Awards brought together a killer lineup of stars to celebrate and honor the best of the music industry. While some fans tune in to see their favorite stars take home an award, there are also many viewers who watch simply for the fashion and admittedly, this includes the sartorial mishaps. This year had quite a few looks that missed the mark, so follow along as we recall the 12 worst-dressed stars from the 2018 AMA red carpet:

Camila Cabello has never been one to overdress, but sometimes this is what makes her stand out for the worst! Rather than a flowing gown or mini dress, Cabello opted for a sparkling corset style top and trousers. While we love when women opt for pants over dresses, this all-black look was simply underwhelming and lacked any unique detailing.

Heidi Klum tends to be bold with her red carpet style, and typically this works for her. For the 2018 American Music Awards, however, we’re not sure it did. Her black fringe dress had a lot going on and seemed to distract from her beauty rather than enhance it.

Jessie James Decker is an absolute bombshell and typically she’s quite strategic in knowing what types of looks flatter her body. For this year’s AMAs, however, we’re not sure she nailed it as per usual. While we love the cutouts on the top of the jumpsuit, the bottom half looked uncomfortably tight. The look would have been much classier and sophisticated with a looser fitting wide leg trouser.

Kelsea Ballerini never takes the safe route when it comes to style, which is something we love about her! This look, however, was definitely not one of our favorites of hers. There are few occasions where a black and yellow color scheme can work together without resembling a Halloween bumblebee costume. The misplaced zebra printed belt just made matters worse!

Rita Ora is another pop star we can usually expect to opt for something bold when it comes to a red carpet event. Sometimes this works in her favor, and sometimes it doesn’t, like at this year’s AMA awards. The star opted for a black floral dress with velvet floral applique, strange puff sleeves and a poofy skirt.

Tyra Banks’ style is completely unpredictable, which is half the fun in seeing what she’ll step out wearing next. While we can appreciate a little fringe every once in a while, we’re not sure the trend is working with this hot pink mini skirt she wore at the AMAs, especially when paired with a casual and unnecessary baker boy hat.

While the AMAs is definitely an award show that’s more open to experimental fashion, Ciara’s look for this year’s show was straight up bizarre. It appeared to be a casual windbreaker jacket cinched in at the waist and worn as a dress. We’re all for sporty style, but this look simply missed the trend.

Chantel Jeffries left little to the imagination at this year’s AMA awards where she wore a skintight, super short black dress. It even featured visible zipper embellishment along the sides in which one was zipped open to an uncomfortably high height. We simply wish Jeffries had opted for something a little classier!

Cardi B is super unpredictable when it comes to style, which makes her one of the most anticipated guests when it comes to a red carpet. This look, however, was unfortunately not one of her best. The oversized floral print and voluminous skirt overwhelmed her figure, but especially so with the floral headpiece that she topped her look off with.

Youtube star and singer Poppy showed up at the AMA awards this year wearing a frilly coral dress which she paired with black tights and pumps. While the dress itself isn’t too bad, the black latex mask she randomly decided to pair with it most definitely is!

Of all the looks at this year’s AMA awards, the one that threw us for the biggest loop is the gown worn by Dua Lipa. The British pop star wore a white ruched look that seemed more suiting for walking down the aisle than for the American Music Awards! 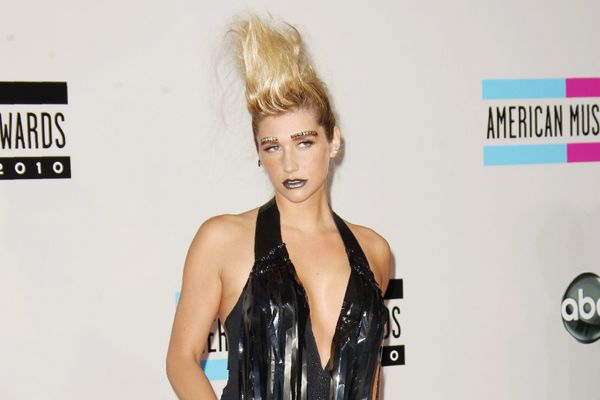 American Music Awards’ 10 Most Shocking Looks Of All Time