Arie Luyendyk Jr. And Lauren Burnham Reveal The Sex Of Their Twins

Former Bachelor Arie Luyendyk Jr. and Lauren Burnham have revealed the sex of their twins!

“Today is the day we put all of the rumors to rest,” the pregnant mom told the camera. Right before opening the envelope, Burnham joked about “how tortured Arie is going to be” if the records revealed they were having twin girls.

The couple then cheered as they discovered their twins were going to be a girl and a boy.

“I’m so relieved that there’s at least one boy in there,” Luyendyk Jr. joked. “Oh my gosh, that’s so cool.”

Burnham added, “We’re so lucky, and I’m just really grateful. And now we’re having a boy and a girl. We’re just so lucky and I don’t know why.”

The couple also took to Instagram to share their exciting announcement. The couple posed with pink and blue cotton candy for the photoshoot to announce the sexes of their children. “Alessi is getting a baby BROTHER & a baby SISTER, we couldn’t be more excited!” Burham wrote on Instagram.

Luyendyk Jr. also posted on his Instagram, writing, “BOY! GIRL! How did we get so lucky @laurenluyendyk?! So excited to meet the @luyendyktwins.”

Check out the exciting announcement posts below: 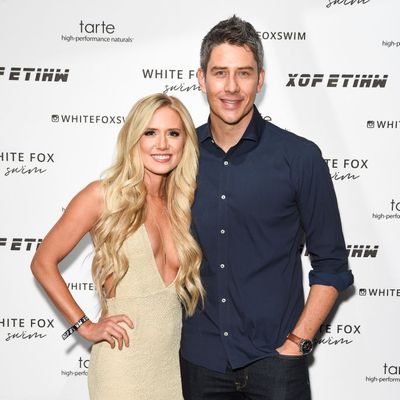