Bachelor Nation’s Ben Higgins recently opened up about the exact moment he got down on one knee and proposed to his longtime girlfriend Jessica Clarke – and why she was so “shocked” when he popped the big question.

The former Bachelor star shared details about the proposal on his Almost Famous podcast, which he co-hosts with fellow Bachelor Nation alum Ashley Iaconetti Haibon, on Monday, March 30.

Higgins led Clarke to a bench in her family’s backyard in Tennessee. Once they reached the spot, “I just got down on one knee and I pulled out the ring,” Higgins recalled the moment.

“And she at that point still didn’t know what was happening,” Higgins said, referring to Clarke’s surprised reaction. “Because her face was shocked… her mouth is wide open, she doesn’t even say ‘yes’ when I ask her to marry me. She just shakes her head up and down.”

Higgins said when he asked Clarke if she was nodding a yes, “she goes ‘Y-yeah.’ Like just complete shock and excitement.”

The Bachelor alum said they were both crying at that point. However, there was an additional surprise: both sets of parents walked around the corner, as well as Clarke’s brother and sister-in-law.

“And we all celebrated together and we were able to enjoy this,” Higgins said. “It was quick but so special… it was the most beautiful setting.”

“I honestly think when the tour got postponed, her heart like dropped out of her chest because she thought, ‘I’m moving back home with my parents, I have no clue of when I’m going to get engaged, I don’t really know what my future looks like, Ben hasn’t talked to me about our future in months and I don’t know why and if he’s ending things or if he’s still in love with me as he’s always said,’” Higgins said.

He said that he couldn’t stand the thought of waiting to take the next step in his relationship, so he went ahead with the proposal.

When Iaconetti asked if the couple would move in together before their wedding, Higgins shared that they will wait to tie the knot before cohabitating.

“That is a choice that we’ve talked about and we’ve gone back and forth on it,” he said. “For a couple reasons we won’t. One is, I think a lot of it is respect for my family and her family.”

“It’s also like I’ve talked about before, it’s lessons learned from past relationships and also I think for Jessica and I, we have abstained and tried to do this the best we can to make our relationship as healthy as possible and there are steps we still want to take to do that,” Higgins added. “So that’s why right now we will not be moving in together before we get married. But I think we’ll be finding a house before then that we can both start to make our own.”

When asked about a wedding date, Higgins said that it will depend in part on Clarke’s brother, who is a professional baseball player.

“Everybody I’ve talked to in the Clarke family has made sure that I know that we have to do this during the off-season,” he explained. “So there is a very select few months that baseball is not active, and so because of that we’re going to be getting married in those months.”

While typically these off-season months would occur between November and February, baseball is one of the many sports impacted by the ongoing health and safety concerns, which leaves Higgins and Clarke’s potential wedding dates all up in the air.

“So like right now, the question is like, I don’t know when baseball season is going to be coming back and I don’t know the new calendar dates or the schedule,” Higgins said, adding that for everyone’s “peace of mind,” he and his fiancé are holding off on making plans until they can “have a clearer idea of when we even could get married and what dates would be available.” 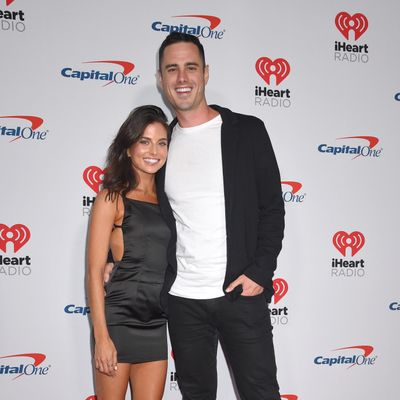