Reality Steve has been providing fans with amazing Bachelor spoilers for countless seasons and this season is no different! Are you looking to find out who Ben picks on The Bachelor season? Look no further! We have all the juicy details of this season below!

At the beginning of this season of the Bachelor it was impossible to tell which lady was going to steal the heart of the adorable Ben Higgins. As the season has gone on however some front runners have seemingly stood out to Ben, and audiences, including Olivia who is maybe not as nice as we (and Ben) once thought.

On tonight’s episode things are getting a little more serious between the bachelor and some of the ladies as the whole group heads out to the Bahamas. As it has now been narrowed down to nine women, fans can’t wait to find out which one is making the biggest impression, and of course, who Ben will ultimately pick.

Thankfully Reality Steve has all of this season’s spoilers including who the final four are and the winner! As always, it is important to remember that Reality Steve is not always correct, but does have a good track record, and this season he is reporting that Lauren Bushnell is the girl to get the final rose, and a ring from Ben Higgins!

Tonight we will see Olivia Caridi, Leah Block and Lauren Himle all go home, followed by Emily Ferguson and Becca Tilley next week. Amanda Stanton is the first eliminated from the final four, then Caila Quinn after the overnight dates, and then of course it comes down to JoJo Fletcher and Lauren B. with, as mentioned, Lauren walking away with Ben’s heart (and the finale rose!) in the end!

Check out the final six and winner here (with photos)! 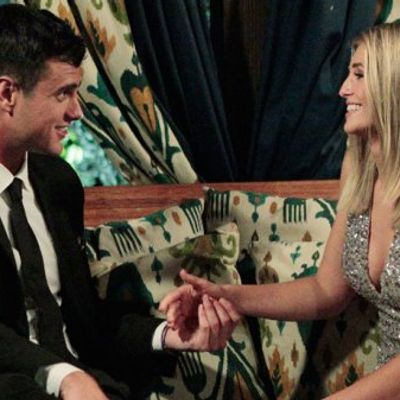