Mike Holmes is one of HGTV’s most widely recognized stars, and rightly so! He’s been appearing on various home renovation shows for the past 10 years! His first show Holmes on Homes was once the highest-rated show on Canadian HGTV. Since the show ended in 2008, he’s been starring on spin-offs like Holmes and Holmes, Holmes Inspection and Holmes Makes it Right. He’s also served as a judge on All American Handyman and Handyman Superstar Challenge and has done guest appearances on Ellen, Home to Win and Corner Gas. He’s a best-selling author, has his own magazine, DVDs, newspaper column and his own line of protective equipment! He’s a walking-talking franchise and he’s not slowing down anytime soon. Here’s a look at 10 things you probably didn’t know about Mike Holmes:

Mike’s big break came when he was offered the chance to star on his own show, Holmes on Homes. According to Holmes, it was a total accident! He was hired to come onto the set of a home advice show to build some models for the set and he ended up telling the director that they “had it all wrong.” “I met someone at the network, and I said, ‘Man, I’ve got a show idea for you,’ and I blabbed on for 30 minutes that I didn’t like the shows on the channel, that [he was] doing it all wrong…when he jumped up and said, ‘I want a pilot right away!’

Now that he’s been on television for a decade, it’s hard to picture HGTV without Mike Holmes! But the truth is, he turned down the opportunity to star on his own show. Luckily, the producer was determined to recruit him. He kept asking him for months. “I kept saying, ‘No, I’m just a contractor, I’m doing three jobs at a time, I’m busy,'” but eventually he caved. “I said, ‘OK, I’m the boss, nobody tells me what to do, I own the show or I’m not doing it.’ And little did I know what the hell I was walking into: owning the show means that I’m the producer. So I walked into a different world overnight and I said I’d do it for two years, and the next thing you know, it’s 10 years later,” he said.

In May 2010, Mike Holmes was named by Reader’s Digest’s as the second most widely trusted person in Canada. The only person that beat him out was David Suzuki. It happened again in 2012, but this time it was Forbes that was deeming him one of the most trustworthy celebrities. “I’m just me, I’m just who I am and the thing that I believe in…when I got the call, ‘Hey, you’re number three on Forbes list!’ I’m like, ‘Number three in what?’ and when they explained it to me I said, ‘What am I doing on that list?’ Because I just thought they’re all actors, what am I doing on that list?…And I guess in a way it’s very humbling to afterwards think about it,” he said.

Between starring on his own show, making guest appearances on several other shows across Canada and the United States, partaking in his fair share of charity work and running his own magazine — Mike Holmes is a busy guy! According to his children, he’s a workaholic. “I do what I do; I never thought I was a workaholic, but I suppose I am. My kids would tell you I am, everyone would tell you I am, but I still don’t think I am. I do things because I believe in it, and just because I love to do it all, I end up doing way too much of it all,” he said. His hard work has paid off though because he’s estimated to be worth a whopping $25 million!

Mike Holmes is so good he was even recruited by Brad Pitt for the Make It Right Foundation! Ironically, they originally connected over a dispute about the foundation’s name which is a phrase Holmes has trademarked. Pitt invited Holmes and his crew down to Louisiana to help them rebuild and raise the standard of hurricane-proof homes after Hurricane Katrina. While he was there he was given the opportunity to meet Pitt and Angelina Jolie and later said that he was shocked by how normal they were! “Once I did meet Brad, I thought, man, you’re really down to Earth. I really expected him to be coming in an having bodyguards around and giving me two minutes of his time,” said Holmes.

5. How He Got Into Construction

The apple doesn’t fall far from the tree! Similar to how he’s mentoring his son, Mike Holmes Jr., Holmes learned his craft from his father who started teaching him how construction works when he was only 6-years-old! When he was six he helped rewire the second floor of his family home and built a three room tree fort in the front yard. Under his dad’s supervision, at the age of 12, he fully renovated his uncle’s basement including electrical work, plumbing, bar and stairs. When he graduated high school he dove right into the field of construction and started his first contracting company when he was 19. His first business cards read: “The F-Up Fixer.” The company consisted of only 13 employees. By the time he was 21, he had also developed his own renovation company.

When he was only 19, Mike Holmes married a woman named Alexandra Lorex. Around the same time, he started his first contracting company. The couple welcomed their first child, a daughter named Amanda, when he was only 21. Holmes and Lorex had two more children, Sherry and a son Mike. By the age of 25, he was a husband and father of three young kids. Their marriage was short lived and by the age of 30 he was already divorced. He never remarried, but is still close with all three of his children and even stars on a new show called Holmes and Holmes with his son, Mike Holmes Jr.!

Mike Holmes was born on August 3, 1963 to Jim and Shirley. He grew up in a three bedroom home in the east end of Toronto, Ontario, with two siblings, a younger brother and an older sister. When asked about his childhood life he describes his family as “poor but content.” He grew up on Kraft dinner and hot dogs, but they didn’t mind at all. Skilled trades were always something he was interested in. At the age of 3, he started following his dad around as he did odd jobs around the house and neighborhood. He began taking in all of his dad’s knowledge and practiced his handy work by dismantling his toys.

Mike was extremely close with his father. He’d been working with him since he was a kid and learned all the basics of construction from him. Sadly, a month after his marriage ended, his father passed away in a tragic accident. He was walking down a narrow flight of stairs that had no handrail and fell. He broke his neck and died instantly. He ended up getting his ear pierced in honor of his father. A few years later his mother passed away at the age of 56 from a heart attack, so he got his other ear pierced in her honor and now wears a set of diamond earrings to represent both his parents.

Mike Holmes has been extremely successful in his trade, but it wasn’t always easy for him. When he first started out in the early ’90s it was a difficult time economically for him and his new business. The entire construction industry was hit hard and left only the “bottom feeders” who would work for the poor at a cheap rate. His company ended up going bankrupt and he was forced to lay off all of his employees. He even had to sell his car just to get by. Thankfully, in 2001 he was given the opportunity to work as a stagehand building sets for the HGTV show Just Ask Jon Eakes and he ended up landing the opportunity of a lifetime as the star of his own show! 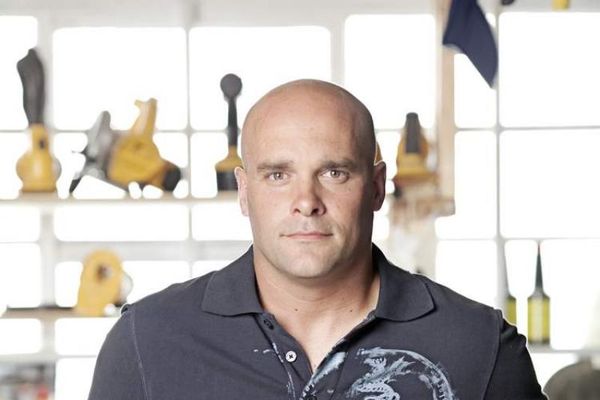