Justin Timberlake is definitely one of the most multifaceted and influential entertainers of his generation. He is a singer, songwriter, actor, record producer, businessman and philanthropist and, ever since he popped on the scene with N’Sync, people have taken a keen interest in everything he does. Here are things that you likely didn’t know about Justin Timberlake!

10. In Touch with His Emotions

The “Cry Me a River” singer took his breakup with Britney Spears pretty hard. The couple broke up back in 2002 after three years together and amidst rumors that she had cheating on him with her choreographer, Wade Robson. In an interview with Barbara Walters, he confessed that he was so devastated by the breakup that he cried himself to sleep at night.

Justin Randall Timberlake was born on January 31, 1981 in Memphis, Tennessee, to Lynn and Charles, a Baptist church choir director. He grew up in Shelby Forest, Tennessee, a small community near Memphis. He has two half brothers, Jonathan and Stephen, from his dad’s second marriage. He had a half sister, Laura Katherine, who died shortly after her birth in 1997.

When the singer was a child, he was the one who was pushing his parents to take him to Star Search and to auditions for The Mickey Mouse Club. “If my parents hadn’t got me to those auditions, at some point I would have found a way myself. It wasn’t down to them. I remember my mom saying: I will take you to every audition, I will support you, but the minute you stop caring about it, I will stop,” he told The Guardian.

When the singer-turned-actor was a teen, he had acne. In fact, during his acne-prone years, he was called Pizza Face. He was also picked on a lot when he was a kid for his curly hair. He was called “Brillo Pad” and “Curly.” It didn’t help that it wasn’t a football player and wasn’t into hunting, two things that were really valued in his community. He was more into singing, dancing, and acting, which were considered “sissy” activities.

The Social Network actor tries to be as frugal as possible, even though he is a multi-millionaire. “I will just say that I am pretty frugal. I’ll probably shop [for clothes] for myself once a year, and that will last me for the rest of the year. What was it that Prince said? ‘Money can’t buy you happiness, but it can help pay for the pursuit.’ It’s nice to have places in LA and New York. I spend enough time in both that it’s nice to have a home. But I don’t need them. I always thought I’d fly on Southwest Airlines, so this sounds crazy, but if I’m able to charter a jet, my friends are so grateful and so excited. None of them takes anything for granted, and I don’t think they’d let me act that way, either,” he told The Guardian.

The former boy bander has OCD tendencies – he’s obsessed with cleanliness. “When I was younger, I’d get one pair of Air Jordans a year to play basketball in, only one pair, and my thing was that they had to be spotless, so I’d clean them with a toothbrush,” he told Vanity Fair. “I had two toothbrushes: one for my teeth, and one for my shoes.”

4. The Beginning of NSYNC

In 1995, the Friends with Benefits actor convinced his mother to move to L.A. so that he could try out for sitcoms, but a month before they were going to leave, she got a call about an opportunity for Justin in a boy band in Orlando. They went to Florida to learn more about the opportunity, which turned out to NSYNC, and both he and his mother were convinced the band could work – and it did.

The Grammy-winning singer will probably go back to small-town life at some point. “Actually, I was just texting my best friend. He’s in Montana. What makes most people comfortable is some sort of sense of nostalgia. I grew up in a small town and I could count my friends on one hand, and I still live that way. I think I’ll die in a small town. When I can’t move my bones around a stage anymore, you’ll find me living in a place that’s spread out and rural and spacious,” he told The Guardian.

Timberlake has dated some pretty high profile ladies in the entertainment industry. He dated Britney Spears from 1999 to 2002. They met on the set of The New Mickey Mouse Club and got together when she went on tour with NSYNC. After that, he dated Cameron Diaz from 2003 to 2006. Then he hooked up with Jessica Biel in 2007. They briefly broke up in 2011, but then got back together and got engaged later that year. They were married in 2012 and welcomed their son Silas Randall Timberlake into the world in April 2015.

JT appeared on Ashton Kutcher’s show Punk’d where he was told that he owed the U.S. government $900,000 in back taxes. Government agents appeared on the scene to confiscate his house and valuables, including his dog, which brought the star to tears. Timberlake has since admitted that he was high on marijuana while he was being pranked, hence the crying. 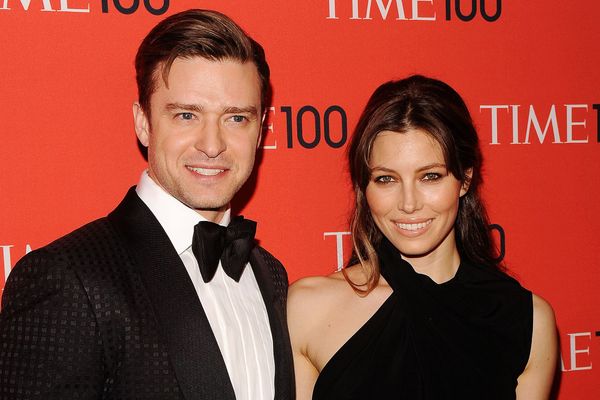