Soap Opera Couples Who Will Break Up In 2021

Super couples are what makes the world of daytime drama go round! They are either falling in love, dealing with conflict, breaking up, or making up! Some stay strong and endure, while others fall apart! Which 2020 twosomes will make it the long haul? Below are some predictions around soap opera super couples who will break up in 2021.

These two exes just love breaking up and making up – they’ve done so multiple times over the years! Nick and Phyllis make an interesting couple; however, even mere months after they reunited, Phick started experiencing “issues.” They may go strong until the beginning of the new year, but by the time the spring hits, they’ll likely break up.

Chabby is a strong super couple, but they’ve been dealt with their fair share of issues in 2020. Not only did Abby deal with a mental health crisis, but Gwen’s scheming hasn’t helped them one bit. It won’t be long until Gwen seduces Chad, and when he crosses the line, he’ll try to cover it up. The truth will finally come out, and Chabby will break up in 2021.

Jax and Nina are a cool couple with great chemistry. Sadly, Jax lies and not telling Nina the whole truth about Nelle Benson will come to haunt him in the new year. Not to mention the fact that Carly was involved in it all. Nina is bound to find out that Nelle is her daughter, whether Benson comes back to life or Curtis digs this information up. When Nina finds out Jax’s role in her daughter’s fall, plus that he knew Nelle was her bio daughter, she’ll be mad and dump him without even a blink of the eye.

This is a bit of a no-brainer. Sure, they’re doing well now, but Nikki and Victor’s relationship is historically a cycle of breakups and makeups. Put Adam and his issues into the mix, and this could happen sooner than fans think! They very well could break up in 2021, but a reunion would also be on the horizon for these two.

This May-December relationship is a fun one, and both Kate and Jake do bring out the best in each other. With that said, now that Gabi’s is waiting on the horizon, their days (pun intended) seem numbered. Sure, Jake and Kate make a solid couple, but Jake and Gabi are what Salem super couples are made of!

Add all the lies and trouble that Peter has been up to (behind Maxie’s back) and mix it with all the people gunning to expose him, and that’s a recipe for disaster. It won’t be long until Peter’s manipulation is uncovered, and when it is, Maxie will dump him like a bad habit.

Summer and Kyle seem to be stronger than ever, but with Sally Spectra up to no good, there is a chance that these two could break up. Both Summer and Kyle have been warned about Spectra using Abbott to her advantage, so it won’t be overly shocking to see the Bold and Beautiful alum place a wedge between the super couple in 2021.

Now that Charlie is letting his inner crazy show, it’s clear that he and Claire are headed for Splitsville in 2021. In fact, this couple breaking up is the last of DOOL fans’ concerns at this point. Could Charlie end up hurting Claire? Assaulting her? Kidnapping and holding her hostage? She may wish she had broken up with him sooner than she ends up doing!

Anna and Finn are a strong couple; however, they have been teetering as of late. Not only is Finn keeping secrets from Anna (i.e., his affair with Jackie), she’s keeping something big from him (i.e. she’s not Peter’s bio mom). Will the two allow bygones to be bygones once their truths are revealed? That’s probably a hard no at this point.

Sharon and Rey are set to get married very soon, and it looks as if the wedding will happen as planned. Rey is good for Sharon in every way — he encourages her strength and independence, has never tried to be a “hero,” is supportive, and good to her kids. Sadly, Adam could swoop in to destroy their happily ever after in 2021.

Can Brady hang on for five years and “wait” for Kristen to get out of jail? This is the land of Salem after all! Will someone swoop in and grab his attention before DiMera is finally set free? Five years is a long time to wait for your partner! There’s a good chance that Brady will either get involved with someone else, or Kristen will bow out of the relationship and realize that she needs to set Brady free.

Molly has a secret with Brando that unexpectedly has not come out as of yet, even after all these months! This is good news for Molly, but soap opera fans know all too well that affairs – even one-night stands – don’t stay hidden forever. Will the truth be revealed in 2021? Most likely, but just after Brando and Sasha become a bona fide couple to truly complicate things. 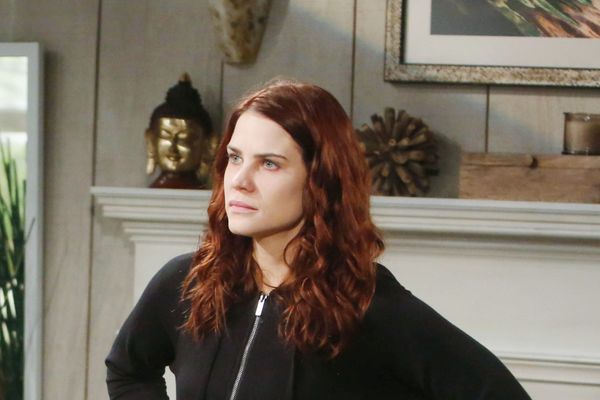