This year was a challenging one, even in the land of soap operas. Sadly, many fans had to do without their favorite shows for a little while; however, this didn’t mean there weren’t some major performances and some incredible stories that were told. As such, Fame 10 lists some of soap’s biggest breakout stars of 2020.

Lindsay Arnold made a major splash in the land of Salem, jumping into the SORASed role of Allie Horton. She came to town with a ton of secrets, one of which got very hard to hide as she revealed she was expecting a baby. Clashing with her mom and dad, Allie has jumped into the DOOL spotlight in a major storyline, and fans can’t wait to see what Horton and Arnold will be up to come 2021.

Trina started off in Port Charles as simply a part of the teen scene and as 2020 is coming to a close, she’s become a major part of one the biggest storylines on GH right now. She may have once been Josslyn Jacks BFF sidekick, but both Trina and Sydney have truly grown within daytime drama over the past 12 months.

B&B fans are very familiar with Courtney’s work; however, if you are one of those viewers who love the Y&R, but don’t watch their sister show, then you’ve been pleasantly surprised by Sally Spectra’s drive, ambition, and ability to stir up the drama. Hope’s debut in Genoa City was much anticipated for months, so here’s hoping she continues to “bring it” in the new year.

There was a ton of buzz around Delaney re-entering the land of daytime drama, and Jackie not only brings a history from Port Chuckles, but tons of secrets from her time away from the little town. While many fans speculated there’d be sparks between her and former flame Robert Scorpio, there seems to be some old chemistry brewing with stepson Finn Hamilton, which has raised a ton of eyebrows. It can’t be easy filling the shoes of Demi Moore; however, Kim has done that and more with the Templeton character.

Charlie seemed a little too good to be true, and as it turns out, he has been playing Claire, Xander, Philip, and Days fans all along. With the recent reveal that Charlie is Ava Vitali’s son, thus Tripp’s brother, some massive shade has been thrown on him. It’ll be interesting to see his transformation from “boy-next-door” into a full-on soap opera villain. Mike Manning has done an incredible job having everyone believe he’s a good guy with some flaws.

Kerr is no stranger to soap operas; however, it’s been a while since she graced the screens of daytime drama. She’s had an incredible year in the land of Port Charles, playing the strong Portia Robinson character, and has been thrusted into one of the most intriguing storylines on the show. Will Robinson help bring down Cyrus Renault? Here’s hoping come 2021.

It’s never easy stepping into an established role, and Isabel Durant has done so with style and grace. Helping to transform Claire Brady from zero to hero this year, she’s slowly becoming a staple in the land of Salem. Between losing Ciara and navigating into a new relationship with the ever-sketchy Charlie, fans can’t wait to see what Claire will be up to in the new year.

Being related to Sonny Corinthos is never an easy thing, and Brando learned the hard way that lies and manipulation are two characteristics you need to have to fit in and stay safe. Johnny Wactor joined the cast of GH this year and has quickly become a fan favorite. His one-night stand with Molly was unexpected, and he also jumped into the mob world with ease. While Corbin is complicated, she’s also clearly loyal and trustworthy. Here’s hoping Brando gets to experience some love in 2021 in the form of a romance with Sasha.

Cady is undeniably a dynamic and diverse actress, who is not only a veteran of daytime drama, but one of the best-of-the-best in her industry. It couldn’t have been easy to take on a well-established role, especially since Melissa Reeves has been playing Jenn Horton for decades now, but McClain has met and exceeded expectations. Special mention goes to her performances that centered around reactions to Jack’s one-night stand with Kate Robert. Cady simply nailed these scenes.

Dane West has blown away Y&R audiences everywhere. After all, how can a little boy have so much talent? While he hasn’t been a regular on the show, his performances during adult Adam’s flashbacks, and acting as his alter ego when Newman spiraled with his mental health, are undeniably Daytime Emmy worthy. Here’s hoping there’s an excuse to bring the youngster back in 2021. This kid is going places.

Every soap opera needs a bad girl who is a little out of their mind, and actress Emily O’Brien has offered that and so much more with her Gwen Rizczech character. She’s left fans on the edge of their seats, not only with the scheming she’s been up to, but also wondering just why she’s so bent on ruining Abigail DiMera. Audiences are sure to get more of her story in the new year.

Cyrus Renault has turned the land of Port Charles upside down as the little town’s new public enemy number one. He’s destroyed the hospital, turned Sasha into a drug addict, drove Julian Jerome out of the picture, has given Sonny Corinthos a run for his money, and was the cause of two characters passing away, plus Lulu’s concussion that drove her to a long-term care facility. He’s the best at being the worst, and much of this has to do with Jeff Kober’s incredible acting talents. He’s made Renault come off as such a slim ball; he’s a character viewers love to hate. Fans now know that Cyrus has siblings in Port Chuckles, and with roots on GH, so there’s little chance Renault is leaving the show anytime soon. 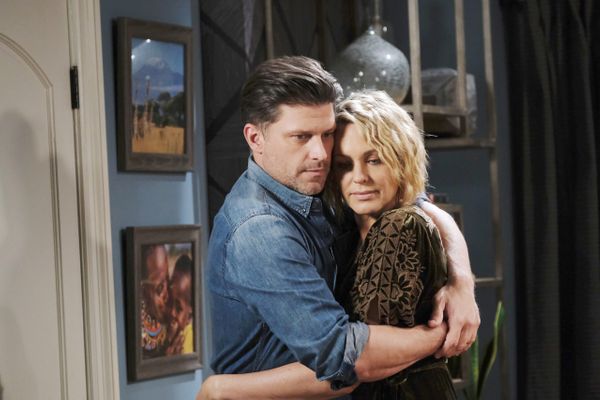